I teach you things about Lesbians

I like the fact that the only people who read me are fat lesbians.  I say fat lesbian like there is some other kind.

I'm sorry about that fat lesbian crack. I know a lot of fat lesbians and I don't mean to hurt your feelings.  In fact most of my girlfriends have been fat lesbians, so I think I've learned a few things about them.

Like I know there are many different categories of Lesbians.

First there are the masculine Boy-lesbians. Boy lesbians look a lot like prepubescent boys. They have short spiky hair, they wear boxer shorts and hang their pants off their ass like gangsters do. Boy lesbians scare the shit out of me. Boy-lesbians are militant feminists. And even though they are anti-penis they love penetration. Sometimes a boy-lesbian tries to pass herself off as a guy. Don't worry too much guys, boy-lesbians don't want to physically transform into a man, because being a boy-lesbian is way more fun. The just want to "try on" being a man. You know.. like finding out what it's like to pay for dinner and shit. Boy-Lesbians [aka aggressives] love to hook up with lipstick lesbians. 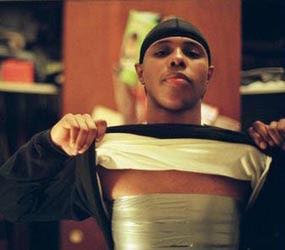 If you aren't a lipstick vag or boy lesbian then you are probably on of those fat lesbians.  Too the fatties reading this and getting pissed off at me, don't. I know you aren't the kind of fat lesbian that turned her vagina away from dick, because the guys don't like you. You're fat. But not ugly. If you had a six pack of beer, a copy of Planet of the Apes for us to watch, and could stomach laughing at my jokes for an hour, you could get laid by me.

Then there is the reluctant lesbian, or the lesbian who just had too much religon mixed in her mommie's baby sack. Reluctant lesbians know that lovin' a chick is wrong and will get them to hell. But they have such overgrown clits that every time a hot chick walks by they get a boner like I did in 6th grade swim class. I remember how I forgot my swim trunks that day and had to borrow a pair of green see-through speedos that the school supplied for the idiots who forgot their trunks.  All those cute girls walked past me and I checked out their stiff nipples and got a boner. Only nobody knew I had one because I hadn't hit puberty yet, so my little wiener was more a like a Vienna Sausage than a life-sized cock.

(I can teach you a thing or two about fat chicks. Even Though you may hate fat chicks.)

Because you are not the kinda fat chick who's pussy stinks, you may not know a lot about stinky pussy. First point of fact. If you are fat chick and if you think you have never had a stinky pussy, then I have some seriously fucked up news for you. Your pussy stinks. Your pussy always stinks and it's stinking right now. Do me a favor. Sneak a peak down there. Ok, now go smell that finger. I hope we got clear on this, Captain Tuna! You get my point.

The best thing about fat chicks is they have cleavage. And the best thing about cleavage is it look a lot like ass, only tits and cleavage don't drip shit out accidentally. The scary thing about fat tits on chicks is sometimes those chicks don't really have big tits. I mean sometimes it looks like they got a big rack. But sometimes those tits will turn out to just be a big fold. Some fat chicks have a skinny girl's small tit genes and just love to eat. And some fat chicks just have the random bad luck to have small tits and a giant frame. I've paid money for freak shows, but I always ask for my money back it they show me into a room full of fat chicks with tiny tits.

Some things are just too freaky, even for T.

p.s.s. I prefer the term I invented for aggressives, boy-lesbians. Don't you? Here's the YouTube.

They serve only as a reminder to depress you.


Talked to a nerdy girl at a bar last night.  I like nerds.  I want to get with a nerd.  She was ex-Mormon and made a joke about 8 year old boys and the pope.

I could be in love.

Totally got cock-blocked by her friends.  But she "just" turned 21.

You say.  "Maybe that was a good thing as I should date women my age."

Somebody ought to fix this.

If you Google "How to kill your baby and get away with it."  You will get no useful information.
Posted by Romius T. at 1:19 AM 2 comments:

For the Phone Dog

I have bad dreams

So I write this long post on Facebook about how I hate my life and the world and I decide to kill myself.  I buy a bunch of pills and start drinking and arrive home to a shock.  A surprise party.  As soon as I stumble through the door I throw up and pass out.

I wake up to a stomach ache and a severe headache.  I see a number of family members and friends through a halo of dim eyesight.  I have only one remark for them:

Knowledge is useless.  The ability to see all sides is what paralyzes god.
Posted by Romius T. at 12:41 AM 1 comment:

Like when I tell you I can't control my shivering around women anymore and that I am not too sure how long I can make it if I don't get some sex soon.

I'd offer to sit you some place other than next to me on the couch, but that would require moving all the used paper plates off of my chair, and I hate moving shit off my chair.  My chair is not for sitting. My chair is an extra dining room table.

Also you sitting close to me is about as close as I get to sex.  So I take your human heat and imagine it to be a warm blankey that you have given me to sleep with when I call out your name in the middle of the night, because of the sleep terrors I get.

I know this makes me seem like a kid to you, even though I am 40 and you are half my age, but I use little mind tricks like that.  Not on purpose.  Not really.  I mean no harm.  No harm is intended.  All you do is think of me younger than I really am when I use my mental tricks on you.

Don't judge me reader.  Nothing ever comes of it.