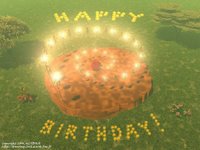 Yesterday was my birthday. I am fucking old. I am 34 in real life. 30 on Match.com and any other personal ad sites. And I am 19 on my.space or whenever I hit on the teenagers.

It's my birthday and on my birthday I try and find and use as many free things as I can that are given out by Corporate America. I used my free movie pass from Harkins to see the worst film ever...National Treasure. I walked out half way through it.

Certainly there has never been a more unintentionally ironic title than... "National Treasure" ..it's certainly no treasure. I could not even sit through the whole movie and it was free. I then bought myself a Volvo 740 from the year of my graduation (1989) and a baseball hat.

My friends took me out to a couple of bars and got me drunk.

Some of my friends think it's really funny to ask fat chicks to come up and give me a kiss on the cheek [they never fail to do so either.] Funny quote after the kiss.

Friend: Where did she get the cake from?
Me: Umm, she's a fat girl they always have cake on them.

We spent the rest of the night leaving fake calls on Gary "baba boey's" voicemails all night.

Science Blog has been posting every few days about the growing power and effectiveness of stem-cell treatments and research. See here:

I say it's about time we hijack every woman's pregnancy, abort the little fetus and get to work curing baldness.
Posted by Romius T. at 3:43 AM No comments: Links to this post

Across the writings of the Frankfurt School there is a consistent sense that art has partially 'held out' against the advance of disenchantment and rationalization in modernity which has subjected the rest of our world to the utilitarian, dominating logic of instrumental reason.

In so far as it is autonomous, art is a refuge where something is preserved from the spirit of Enlightenment.

[as Kant's vision of it: "the idea of a free, human social life in which men organize themselves ...in the conscious solidarity of the whole."]

"Even in the most sublimated work of art Adorno insists, "there is a hidden 'it should be otherwise'". The truth that art speaks is the untruth of the status quo, it is the antithesis of that which is the case.'"

Art breaks the spell of actuality and enables us to see that things could be different. This longing for a better world, 'une promesse du bonheur,' is linked by Horkheimer with the residually theological in the aesthetic. Adorno agrees that works of art point to a practice from which they abstain:"the creation of a just life. In this they also resemble the purposelessness of childish play."

It is important however to note here that, despite this favourable account of the political power of the aesthetic, its utopian elements are, particularly for Adorno, only ever negative. There can be no positive account of this utopia, or how it should be attained, let alone the recognition of anything as the positive advent of these utopian realities.

The question then becomes, can the pursuit of such ends be justified if the purposes of such ends are primarily negative. Is art then a failure? Have we lost the productive and creative abilities of those citizens who lives incorporate an artistic vision or milieu?
Posted by Romius T. at 8:35 PM No comments: Links to this post

Take my life, but please don't sexually abuse me.

"Sex crimes of this nature have generally been associated with deaikei sites," Shukan Bunshun hears from a journalist. "But lately the deaikei sites are being more closely regulated" -- forcing sexual prowlers to look elsewhere for vulnerable victims. And who is more vulnerable than a would-be suicide afraid to die alone?"

Yui wanted to die. She had slashed her wrist, had hanged herself -- but to no avail. At her wits' end, she checked into a Web suicide site. On the site's bulletin board she posted a message. "Would anyone," she inquired "like to join a despairing high-school girl in death?"

Yui, unemployed and in her 20s, encountered a woman who agreed to die with her on one of the Deaikei Sites. They arranged to meet at Tokyo Station, but when Yui arrived she was accosted instead by three young men.

Far more humiliating and horrible than trolling for a suicide buddy on the Japenses version of Craigslists for the suicidal, but luckily there is a happy ending of sorts.

Soon after her brush with a serial rapist, Yui killed herself with another man she met from the Deaikei Sites.

You've got to dig a goal oriented chick like that.
Posted by Romius T. at 4:36 AM 2 comments: Links to this post

"The church staff told us she wanted to sacrifice the middle child by 3 o'clock.''

Detectives later found out the couple ultimately planned to sacrifice all three children and already had gone to a Farmington church with that intent but had been unable to get in.

Churches should really rethink that whole open door policy it seems.
Posted by Romius T. at 4:33 AM No comments: Links to this post

Easy answers to tough questions, or the further adventures of O. and K.

The audience comprised a set of rabid bacon consumers who had long ago abandoned any precept of continuing with carbs in their diets.

"Because, I just don't think you get it." O. added. Maybe O. was right. Maybe K. just didn't get it. K. certainly thought he was getting it.

K. followed O.'s gaze out to her audience. His stare picked through the remains of an earlier society. People who gathered around the television set. Cuddling up next to it's fuzzy glow in some PreCambrian reenactment from our ancestors receiving the mysteries of life by the great shaman.

Just a generation ago you watched television this way. When Cronkite told you how it was that's just the way it was.

O. had this kind of control too. She knew it, and when K. looked into the whites of O.'s eyes, he knew... she knew it. The task before K. then was going to be a difficult sell.

There was an audible gasp after O.'s last statement. A collective holding in of the breath from O.'s prefabricated jury. No greater crime could be committed in the land of Miss O. than to be accused of "not getting it."

"I'm not sure I deserve it." K. tried to explain. "Fame derived from documenting my masturbatory technique for posterity by submitting a video focusing particularly on a happy endings, doesn't normally have the gravitas for a Warholian 15 minutes. Even in our internet- Lindsay Lohan pantiless, pantied, then pantiless world we inhabit today.

"I can't explain why everything happens in the world. For instance I have no idea why Jim Carrey's face is slowly turning into the face of my Uncle Otis."

That metamorphosis had been bothering K. for quite sometime, but there was no denying that the transformation was taking place. It was creepy, but doubly so for K.'s cousins who were big fans of Carey's work.
Posted by Romius T. at 11:18 PM No comments: Links to this post