History is alive and well.

Like most of my generation I thought history happened to other people. You read about it in books and tried to memorize important dates and people so you could show off to your buddies while playing countdown trivia at bars.

We are living in history.

They have repealed the 4th Amendment.

What more do they have to do? Steal elections, lie us into wars, torture our enemies and afterwards pardon themselves for their crimes. That isn't enough to awaken us from our doldrums?

How many amendments to the constitution need to be discarded before we realize the biggest threat we Americans face comes from our leaders?
Posted by Romius T. at 9:49 PM 2 comments: Links to this post

I just hoped to get your attention for a short bit, and since you read 90% of your messages I thought it was feasible.. You see I am sort of a loser and all. I figured if I got somebody as cool and famous as you to stop and think about lil old me for a sec it would the highlight of my lifetime!

I know that maybe asking a lot as I am not a handsome man or a rich man or a man with any talents. Sure I can roll my R's, but I think that is genetic. So it doesn't count as a talent. Yesterday I had a dream where we struck up a converstion. But don't worry I am not a stalker or anything!

It would be really cool if you messaged me back even if it were just a copy and paste job like..

When I typed this I really thought it might work. I am working through a strong case of the ennui. My hope, like that of all Americans, is that a celebrity might be able to get me through it. I thought about watching Racheal Ray's new morning chat show, but then I would have to shoot myself.
Posted by Romius T. at 11:04 AM 1 comment: Links to this post

Bill Cosby has asked every man and woman in America to give 8 dollars to support a National Slavery Museum.

I'm sorry Bill. You've tried that before. If you give me that 8 dollars back, I will happily donate it to your museum. Until then, you ain't getting 8 bucks from me again.
Posted by Romius T. at 10:53 PM No comments: Links to this post

Blacking did not prevent you from killing your son

But I couldn't do the reveal.
That would be mean.
Posted by Romius T. at 9:23 PM 2 comments: Links to this post 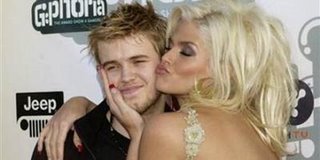 I know this is just my second post since joining this illustrious blog. But things back at the old Loatian Mini Wife Turkey-baster breeding farm have been busy.

What events could have aroused me from my slumber? A Hollywood Tragedy. No less a personage than Anna Nicole Smith's son has died and now some in the media want to blame her for it.

From the reports, I hear she attempted to give him mouth to mouth. I can't imagine a dead person not getting aroused by that. I am pretty sure I just solved this case. Just go arrest Howard K. Stern and leave my octogenarian loving playmate alone. I may need a 10th wife soon.

Larry King blogs every Thursday night at 6 P.M., when he's not too drunk he posts.
Posted by Larry King at 9:57 AM 1 comment: Links to this post 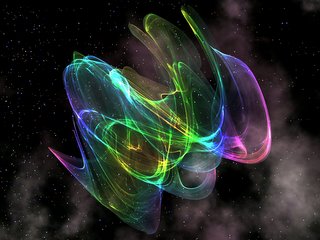 The MYTHology of Bathos may be complicated, but certainly it should not be as muddled as say the mythology of Charmed.


I've been in a long process of review on this blog.

I have recently added a few loyal readers and they might want to "get up to speed" on my obsession with Steve Nash's wife.

It's also been a lot of work, so I don't have much new to post.

But since it has been so much work I think you should go read some of the new/old stuff. I have added links, pictures and some times I have edited more than just the grammar and spelling.

Plus you've probably forgotten how great some of the old posts were.

It starts off as the true story of Romius T. walking to Mcdonald's to collect his inoperative Buick and turns into a 2nd person account of a Norwegian girl's parents murder and her subsequent rape by Uncle Billy (aka Santa) who happens to be from England.

The rest kinda suck. I haven't tried to rewrite them, but kept the flavor of the original post. I included this post on Oprah because within the post there is a new link to a pantyless Lindsay Lohan and because I like Kafka.
Of course one my new readers is this chick, and she might get pissed about how she was profiled in a previous post. But I figure she won't come back here, cuz reading sucks.

Unless you did. But what are the odds? I saw on my stats traffic that you clicked two whole links. Is it because I used big words? Is it because none of the posts were about you? I guess we fixed that, eh? Glad you're back.

I'd Cry Crocodile Tears for Steve Irwin if I could. 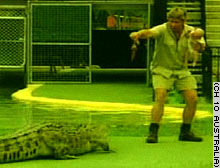 I figured I 'd wait for the buzz to die down before posting something on Stevey "sure I'd feed my kid to the crocks" Irwin.

Unlike some bitches I am not gonna sit and whine about how I can't get any readers despite the fact that I posted like a total of 3 times in the past 2 months for you.

It turns out I am not the only idiot on a soapbox, as PETA has taken a stand against the famous Crock Hunter.

“It comes as no shock at all that Steve Irwin should die provoking a dangerous animal,” PETA’s Dan Mathews tells The Scoop. “He made a career out of antagonizing frightened wild animals, which is a very dangerous message to send to kids.”

You see PETA is pissed about Steve's latest message "Ouch .. a stingray killed me." Rather than his previous message to kids "You are all rather tasty, let's see if the Crocks can bite you."

I can only say that PETA members are less qualified to comment on human behavior than Anna Nicole Smith is qualified to counsel at a suicide hotline.
Posted by Romius T. at 11:55 AM 2 comments: Links to this post

Walmart vs. Target? Or why I refuse to write diatribes against MILF's and their love for Target. 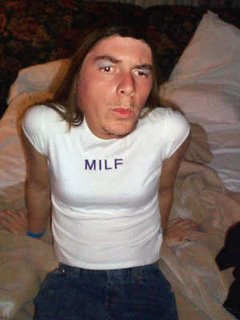 No need to worry. You haven't wasted any time not worrying about this issue. Why? Because there's not that much difference between The Walmart and Target. Almost no difference.

You can go read the Alternet article and decide for yourself. Or you could just be lazy and let me recap it for you.

They both pay shitty. They are both anti-union. Target donates way more money to charity. Target is way cuter.

It's true too. Target is way cuter. Hey, I know... they pronounce Target in the French. But MILF's and Soccer Moms aren't alone in getting caught up in the 'cultural mystique' that allows advertisers to encourage 'where' consumers purchase their 'commodities' to become part of the construction of their personal identity.

Anyways, it is hardly the fault of any Soccer Mom that the Left has lost its moral advantage to the RepublicaScum. (tm) It was the fucking Boomers who abandoned the defense of the working class and it was the Boomers who substituted boycotts for radicalism and 'buying green' for revolution.

The whole purpose of this blog is to avoid the Pedantry that infuses much of the orthodoxy.


That's why I refuse to write a post that attacks MILF's for caring too much about the differences between Americas favorite two box retailers.
Because I avoid pedantry and because I spend way to much of my day pretending to hide a semi-hard-on behind my 'baker's apron' to make such an attack.
Posted by Romius T. at 8:04 AM 1 comment: Links to this post