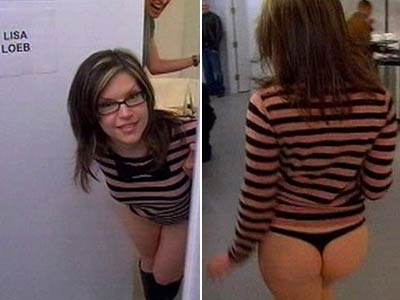 What won't a 30 year old chick do to find the man of their dreams? That's why you gotta give some love up for these old chicks,. Dignity? I don't need no stinking dignities.

I have decided to turn this blog into all things Lisa Loeb. IF that angry black chick can can get 500 hits a day goofing on Flavor Fave then I should be able to double that with Lisa Loeb's ass hanging out her thong!

Go here for a video where Lisa shows it off! I'll get around to watching her show sometime.
Posted by Romius T. at 8:28 PM 3 comments: Links to this post

#1 Single-or Why I love Lisa Loeb-can I have some Man-babies with you? 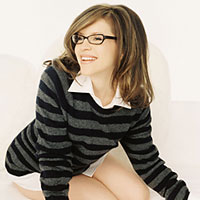 Lisa Loeb is a singer-songwriter popular in the 1930's, but she is still way hot in a non-Sci-fi geeky "I wear me some spunky eye glasses and shit" kinda way.

She appears on a television show called #1 Single on the E Network (that stands for entertainment folks so you know it's good!)

In the show, Lisa is looking for a man. She wants babies in a bad way. Her biological clock is ticking so loudly that it's reverberations once caused a tsunami back in the year 2005. Several million non-whites were killed, I have been told.

Here is a sample of Lisa's personal ad:

Texas girl (minus big hair). Petite build, brown hair, hazel eyes. Singer-songwriter. I listen to Zeppelin but don't sound like them. I love to cook and eat, go to restaurants, grocery shop, read, travel and hike. I enjoy Chinese food, good conversation and long walks on the beach (ha, ha!).

Seek intelligent city guy (NYC or L.A.) between 30-45. Must be smart, funny, sensitive (not wimpy), adventurous and family oriented. Preferably Jewish. No diets, no fake hair. Healthy and active a plus. Must love cats.

As you can see from her description of the perfect man, I am totally perfect for her. I hate animals, I'm wimpy and even a little uncircumcised. And yesterday I contracted yellow fever from the stains on my couch.

But from watching her and her mother talk on the show I know all I need to do is survive the first date and we will be in a six year relationship.

Oh, you gotta go watch this clip here. Lisa totally goes all corporate and starts giving her resume out, "like she is a CEO of her own company" and shit. On teevee she seems like so down to earth but on the clip

she comes across as someone I would drown in a bucket of her own vomit in her child's kiddie pool.

Putting that aside, while Lisa Loeb maybe the illiterate Sarah Vowell of Pre-Emo Pop Princesses which universally inhabit the Myspace sites, I do still love her.

Are you Hot or Not? 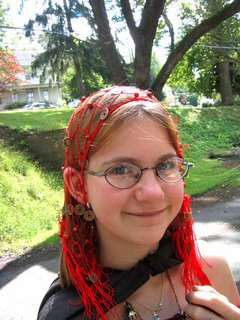 I don't like quoting Queensryche lyrics anymore than you like reading them, but sometimes we got's to keep it real!

I ask the deep questions here at Bathos, like are you Hot or Not? My guess, you're probably not. Try not to take any offense to that. Yes, I am better looking than you, but I have had Tom Cruise and Kate Holmes praying to Xenu for my ass. What have you done... been to the gym lately? Extra cheese tastes great ...till it winds up all cellulited and cankled.

If you think you are hot, but you're not...well... you're not alone. There have been over a billion rankings so far on that website Hotornot and the average is 5.5. I am not a math major, but it seems to me that the average on a 1 through 10 scale is a five.

Here's a tip for those (chicks) who have wandered around the Earth thinking they're hot when they're not..

Geek-girl--( I think I am an 8) Did you attend the Midnight opening of Serenity? Did you attend it because you thought it was gone be cool? Where you adored by 74 geeks and Nordic or some mixture of dorks, and dweebs? Could you dip you dirty tampon in a glass with celery and get them all to believe it's a Bloody Mary?

Sci-fi Poser Chick- You attended the midnight screening of Serenity because you knew you'd be the hottest chick there (other than ones on the screen) and your Dungeon and Dragons playing boyfriend practically came in his pants when he heard the words "theatrical release."

While at reenactment scenes from the Renaissance Fair people constantly point out your ample bosom. That's because you're fat. But you have really nice hair, which you thinks covers up for the fact that you are fat. It doesn't, it's just a waste of some really nice hair on a fat chick. Here's a pointer, put down the twinkies... and nobody gives a shit about your new highlights.
Posted by Romius T. at 5:31 AM 2 comments: Links to this post

I hear podcasts are all the rage. I have geeky Sci-Fi friends who are like all pod people and stuff.

He's just getting started "I am pretty new at this , so I hope you bear with me, but eventually this will all be blog-o-matic! (lookey there , coined a new word on my first post!!)"