What's the deal with Pedro Martinez ?

Lately Pedro has been hanging out with a midget. A man by the name of Nelson de la Rosa.

A few New York Yankee stars and their pals have lapsed into a locker room mentallity regarding the rumors that have surrounded the Boston Red Sox baseball player and his 28 inch high friend.

The controversy first started when Pedro began taking Nelson to baseball games and was seen spending a great deal of time with him. Rumors spread about Nelson's height, his effect as a magical good luck charm at baseball games, and his abnormally large penis. I know most of you will think I have turned into Howard Stern with my fixation on midgets, but frankly I think I have a great deal more to say than any old shock jock on the subject.

I only bring up Nelson's large penis and minature sized body as a segue to my latest breakthrough discovery which I discuss in my unpublished novel The Midget Manifesto (forthcoming).

I believe that Pedro and the Mini Man's Mini Man may be the world's first couple engaged openly in a new category of sex . In the Manifesto I detail the MIDGET category in contrast to the more familiar expressions of love found in homo, hetero,and k-9 sex. If Pedro is indeed having sex with this male midget (and I believe he must be) he is not engaging in any kind of gay sex, just midget sex.

When viewed from within this new paradigm the addition of midget sex as a category of sex should be seen as beneficial and add to the acceptance and understanding to all of the little peoples of the world.

So to all those Yankee fans who are spreading gossip of Pedro's mental decline or his supposed homosexuality, shame on you for throwing around such antiquated concepts and prejudice. Isn't it about time that we learn to accept the love between a boy and his midget?
Posted by Romius T. at 6:58 AM No comments: Links to this post

I hear that the RABBIT is single again god I am in love:

Tell Me To Look On The Bright Side And Feast Upon a Light Lunch of Knuckle Sandwiches. In American Culture, False Cheer Is The Norm So We'll All Keep Gobbling Down Combo Fajita Platters And Shopping At Sizzlin' Summer Sales. No One Wants Us At Home, In Our Five-Year-Old Fashions, Crying Into Our Homemade Soup. But Sadness Is A Big Part of Happiness, Damn It! Hey, Grab Me A Beer While You're Up.


Visit her here at www.rabbitblog.com

I lost my ID the other day, so someone is parading around town as the big time loser that I am.

Decided to leave the house for a change, so of course the first bar I went into carded me despite my obvious age.

Eventually I did end up in a bar that would serve me. The Bikini Lounge.

At The Bikini Lounge the women don't get naked, but they do give $5 table dances. I met and fell in love for life with, Jasmine. Jasmine eventually gave her number out to my friend because as he said "I engaged her in conversation."

Good news though, I was promised that I could have sex with her on their wedding night.

You would think that would be enough fun for a night, but my friend felt the need to cruise down hooker alley.

One of our favorite games it to shout out "Hooka" to the hookers. Many look at us as if they had just come to the realization that they are indeed hookers with our help. Maybe we are making a difference. I think we may have saved that girl's life, though I think we actually hurt her feelings.

Now while cruising hooka alley we also came upon a couple of "sisters" who appeared to be drinking 40's from a bag, and having a good time. We stopped by, and one of them wanted to jump in with us. We were not sure if she was a hooker, but we let her in the front seat anyways (that's right I was forced to the backseat.)

In our attempts to engage her in conversation.."So what's your name?" All we could get out of her was " Oh, My god!" She must have repeated this like 36 times and she kept insisting on smelling our hair.

Because she was a sister my friend argued against "taking advantage of her." I was slightly pissed about that. I mean I was so in the mood to take advantage of someone. Even if it meant just watching someone else get a BJ.

Eventually we ended up dropping her off at her house. Neither of us could decide if this girl was a hooker or what sorts of drugs she was on. But I have a feeling we might meet her again as a REAL phone number was given out.
Posted by Romius T. at 3:35 AM No comments: Links to this post

14 Signs of A Serial Killer

According to Dr. Phil (and who would know better?) here are the 14 signs..Let's see how many I have:


Fourteen Characteristics of a Serial Killer. Could you be raising a criminal? Acts of violence don't come out of nowhere, and every parent should be aware of the clues along the way. (Too bad my parents weren't.) For the most violent of criminals, there are warning signs that often start in childhood. Below is a list of the 14 most common traits of serial killers:

Let's see how I stack up?

I guess only 7 signs is pretty good. Rest easy Momma, you did a good job!! Anyways, if I did become a serial killer, it would all be for Phil Mogg. Phil, your the greatest!

Cryptically, I must add $IGN OF THE 4

My roommate just received his Columbia House record of the month club mailing. Peer into the contents and we will find:

It should be noted for those who don't know me personally my roommate is a 245 pound black man.

And at 6:45 this morning he decided that he needed to quit drinking because he has a jury trial for a DUI today. (Oh yea he's innocent)and now he needs drive himself to court!

Posted by Romius T. at 7:10 AM No comments: Links to this post

I am all out of sunflower seeds. 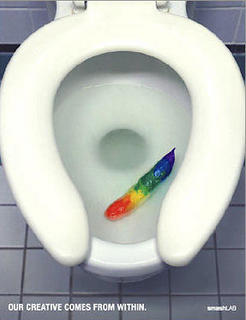 I have been thinking way too much about my pooh lately. I've been considerin documenting "my gifts" to the porcelain god.

My roommate has a webcam I could borrow. Then I would use those pictures to compare and contrast the color, consistency, size, and shape.

I have Mary Lou Henner to blame for my unwanted preoccupation with my bowels and it's byproducts. I caught her on television a couple of years ago while watching Larry King. She talked about how she would weigh her little poops and watch to see if they sank down or floated.

Ostensibly, shite can tell you a lot about your health. Floaters are not healthy, it means you need more fiber. And since I am a hypochondriac with no health insurance I could find no better methodology of discovering my health and constitution than by 'poop watching.'

Curiously, prior to my introduction to Ms. Henner's poop philosophy I had no idea that I went 'once a day' on a fairly regular basis.
Posted by Romius T. at 3:47 AM 3 comments: Links to this post