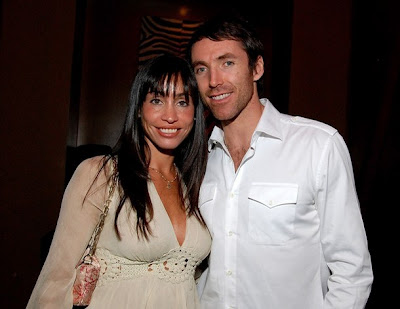 Also this whole fan letter thing never caught on with my readers since most of my readers are Internet geeks who don't play sports and hate jocks because they are always getting the crap kicked out of them by guys like your husband.

The rest of my readers are women and most women hate sports except for those stalker groupie women who love the free meal ticket that a professional ball players salary and fame can get them.


Obviously, I am not talking about you Mrs. Nash. I am talking about those nasty skanks like Shaune Bagwell (above) who try and bed themselves a millionaire by having unprotected sex and getting knocked up just so they can sit at home all day and get fat. And of course I am talking the 6 women who have illegitimate children with Seattle Supersonic star Shawn Kemp.

The reason I am writing you is I just wanted to let you know that a lot of bloggers out there are calling Steve Nash a racist because he went after a black basket ball player during a fight that broke out between the Suns and Houston Rockets.

I know Steve did not cause the fight. That was cheap shot artist Matt Barnes. He was the asshole that started every thing. All Steve did was make sure that Alston got his hat handed to him after sticking up for himself.

I don't think that makes Steve a racist, but plenty of other people do.
Posted by Romius T. at 1:49 PM 2 comments: Links to this post

I drive by a couple of high schools on my way to work every day. And by drive by I mean I drive a few miles out of my way so that I can watch all the teen girls clamoring around the bus stop pretending not to be watched by all the pedophiles parked along the curb in thier 1987 Buick Skylarks.

Unlike those losers I have a plan to pick up the girls. Mostly the plan is to wink at all the girls I see as they run through the cross walk. When that doesn't get me enough attention I usually honk my horn at them. I think that tells the girls that I am not just some older guy with a car and the ability to buy them beer, but that I am also way into them.

Honking at the girls doesn't work. I think some of them just think it is kinda "creepy" to honk at a random girl in a crosswalk, so sometimes I pull over and and ask the girls if they have seen my lost puppy, because it does not matter how long that scam has been run it is still the best thing going, because teen girls craveattention even more than they love puppies and candy. And teen girls love puppies enought to get in the back of a van with me.
Posted by Romius T. at 12:37 PM No comments: Links to this post

Fat chicks get more sex than you

I don't get a lot of credit for the stuff I do. Like when I went and got myself a new phone from Verizon I don't think I got a shout out from anyone telling me how amazed they were that my credit wasn't as bad as you assume it to be, because a wireless carrier actually gave me a phone and a 2 year contract.

Another thing, I get comments all the time telling me that I don't post enough even though those people rarely read all three of my blogs, much less subscribe to the podcast on I-tunes. When you add up all the extra posts I have on Bathos it is just like I post once a day at the Self Help Center. I won't mention that you should be taking the time to read all my links and archival material. I believe I was the guy who trade marked the term "incomparable archives." I know you guys hate reading more than you have to but if you see a link to another part of this blog you really need to read it. My link to why fat chicks love sex is more scientific than the article you will read in the mainstream press.

I know this is only good news for you since you have such a hard time getting laid with regular sized girls, so you might as well give up on them and try for the sure thing that a box of little debbies and a 12 pack of Icehouse beer will get you, and by get you, I mean sloppy vag.

I don't care how clean a fat chick is you know she has a sloppy pussy. I think that is because her lubrication juices are constantly running. I think I have made the whole "fat chicks squeal like pigs when you insert your penis in them joke" so I won't bother using it again here. But fat chicks do love insertion more than other chicks. I think that's what makes having sex with fat chicks so much fun. Fat chicks don't get all "clitoral" on you and only a chump virgin like you could go and misinterpret that as desperation. When all it really is, is god's plan.

A lot of guys will tell you that they enjoy sex with fat chicks because they are grateful for the dick that you give them. I think that is a very offensive statement, but importantly it is also a false statement.

Fat girls get as much sex as they want. Most guys will sleep with a fat chick even if it is just for the night. And we can't forget how black men love big women. I know it is true that white guys don't like a big ass or a large sized woman, but we white guys take what we can get sometimes and because we are all hornier than women in general white guys always find themselves hitting on the fat girl in the corner of the bar by herself.
Posted by Romius T. at 3:20 PM 2 comments: Links to this post