God must really think your stupid! 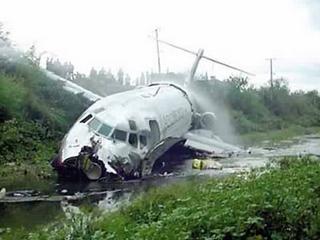 Reading this blog, you might get the impression that nothing could offend me. I go after gods, apple pie, and the sanctity of market oriented economies. I use vulgarity and insult like I invented them. I speak of midgets, sex, even midget sex. Since I am so rude, how can I (without a bit of hypocrisy at least) be offended? Easily.

In 1982, Kelly Moore was part of a horrific air disaster when the Air Florida Flight 90 she was aboard crashed into the 14th Street Bridge over the Potomac River, then plunged into the ice-crusted river. In her own words:

While the others were eventually dragged through the water to safety, I was the only one who was completely lifted up out of the water, (exactly) as I'd prayed. God has saved me from this crash, I thought. I didn't know why, but I knew it was his strength that allowed me to grasp that rope with frozen hands when I had no strength.

In response to my eager interest, my nurse risked her job to tell me of Jesus' love for me. As she spoke of how he died for me, I responded by turning my life over to him. For the first time I felt real peace.

In other words god killed 74 people in order that one self-centered stewardess would see the light, have 3 home schooled kids, and regale atheists with god's compassion. Nice. What a fucking ego.
Posted by Romius T. at 6:51 AM