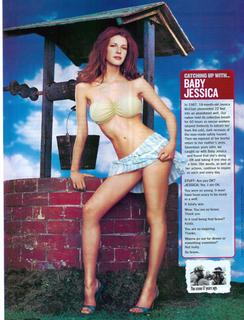 Many of you will remember Jessica Hawn as the little girl who fell down a well and was rescued live on TV.

Babies falling down wells and church going secretaries fucking their bosses were among the main media generated events which defined Generation X.

Just like the "Who shot J.R.?" and "How do you merchandise this and put TV slogans on jeans?" defined the Yuppies of the Baby Boom Era.

Now while many of you who will actually remember Jessica that way, it's because most of you are brain damaged idiots.

Jessica Hawn was a white-trash slut/ho who banged Tammy Fae Baker's husband. Jessica's slipping over his tiny cock helped Satan bring down a multi-million dollar pyramid scheme that had been "fillin up the coffers good" for our boy Jesus H.

Baby Jessica was a little dipshit toddler that apparently couldn't tell her ass from a hole in the ground. Though she later went on to discover gravity.

Don't you go fucking judge me assholes, but I was watching Larry King the other night when I saw Jessica give him the greatest interview ever.

"Lo and behold" Larry tried to get Jessica -The White Trash Ho- to come clean about her affair with PTA leader Jim Baker. She didn't tell the truth or own up to any wrong doing, but she did manage to 'piss me the fuck off' with all her made up excuses.

I couldn't believe that Jessica had the nerve to call Jim Baker 'immoral.'

Don't get me wrong, Jim deserves to be executed along with every other money grubbin TV Evangelist who gets the near dead to Bow down to the Leper Messiah.

But I get pissed when a pussy showing Playboy model pretends to be a moralist. Jessica raped a middle aged man and forced him to cheat on his wife. Then she blames every one else for all the bad shit that's happened in her life. (Read: How else would I have made a million dollars and got famous?)

While I would usually be content with ending any post at my concerns, I think the only person out there with any real beef is Baby Jessica. Who apparently only looks good in a hoax.
Posted by Romius T. at 12:29 PM