Do you think Mrs. Steve Nash will get to hang out with George Bush now that the President has bought land in Paraguay? 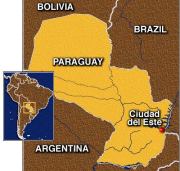 I promise to stop streaming episodes of Ugly Betty
so I can report things like this to you.

"The Cuban news service reports that George W. Bush has purchased 98,840 acres in Paraguay, near the Bolivian/Brazilian border. "

I've always wondered what the back-up plan for Bush was if his push for a third term goes badly. I mean you totally know that he doesn't see a third one not coming. Imagine Dick trying to explain it to G. W.

"Term limits? Who's idea was that?"

A letter of inquiry for Steve Nash's Wife:

I have to wonder if you are at all pissed that your adopted country's president is making his way to your birth country? Actually I have to also wonder if you've even adopted this country as both you and Stevey have kept Canadian passports.

As long as you stay on your path towards learning and using English Only, it's all good here.