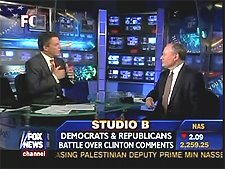 My curiosity was peaked after I noticed an upsurge of hits on my statistics page for FOX News reporter Sheppard Smith.

And since according to google I am the world's foremost authority on Sheppard I had to figure out what the cause was.

Turns out Billy Kristoll gets his intellectual ass handed to him by our good buddy Shep. Sheppard gets Kristoll to admit that Bush is more concerned with midterm elections than winning the war in Iraq. Sheppard calls the admission "despicable."

The video in the link just confirms how retarded most of Bush's cronies are when they are not being softballed. Why can't everyone on Fox be this "fair and balanced?"

Should we start a countdown for how long Shep will keep his job?
Posted by Romius T. at 7:32 PM

The man should lay off the eyeliner. I find his gaze too intense to stare directly into, I fear being sucked into the void of his very soul.

I was gonna include in the post that I thought sheppard smith was gay, but since he has not outed himself I won't either.

I figure almost no one reads this blog and even fewer people will read the comments section so it's ok to talk about this gayness here.

Not that there is anything wrong with that, some of my best bi sex partners are gay!